This post is a different from other Starburst Memories for a couple of reasons. Firstly, it doesn’t feature a genre-magazine, FILMS AND FILM-MAKING occupied that middle-brow region presently occupied by SIGHT AND SOUND in the present day; quasi-academic with a liking for a po-faced spin on the mainstream. CLOSE ENCOUNTERS OF THE THIRD KIND is featured in the March 1978 edition, but the editors have chosen a publicity still from JUBILEE for its cover image: Adam Ant looking like a CLOCKWORK ORANGE Droog doing a Springsteen impression.

Secondly, this magazine isn’t from my loft collection, instead it was purpose-bought from EMPIRE EXCHANGE, near Picadilly in Manchester; its a sort of Harrods of the North where it is possible to buy anything, if anything includes African masks, cardboard cut-outs of Stormtroopers and grubby magazines. There is a patina of muck over everything so when you are leafing through back issues of EMPIRE, MOJO and Q your finger tips feel a little besmirched. I won’t mention its significant collection of genuinely mucky magazines (who buys pre-loved issues of RAZZLE anyway?).

It was during a recent visit of EMPIRE EXCHANGE that I chanced upon the Jubilee edition. It is a fascinating insight into the era and the fairly narrow audience that the magazine was trying to reach. On the inside cover there is an advert for the East 15 Acting School with a swarthy-looking Oliver Tobias who was “now filming THE STUD with Joan Collins” as its representative.

There are a couple of substantial feature articles in there, interviews with Robert Powell and composer Elmer Bernstein, however it is the copious stills that’s distinctive about the magazine. In a time where the main publicity for a film was centred on judicious use of ‘lobby cards’ to express the best of a film, FILMS AND FILMING tried to catch the audience’s eye with the the latest releases. How many of these can you remember?

THE BOYS IN COMPANY C
THE SHOUT
ANOTHER MAN, ANOTHER CHANCE
A SEPARATE PEACE
and, by the way, CLOSE ENCOUNTERS OF A THIRD KIND

The photo feature for JUBILEE looks oddly out of step with the rest of the magazine. It seems very strange to see Gene October as Happy Days looking shocked in Crab’s bed alongside the topless Bod. 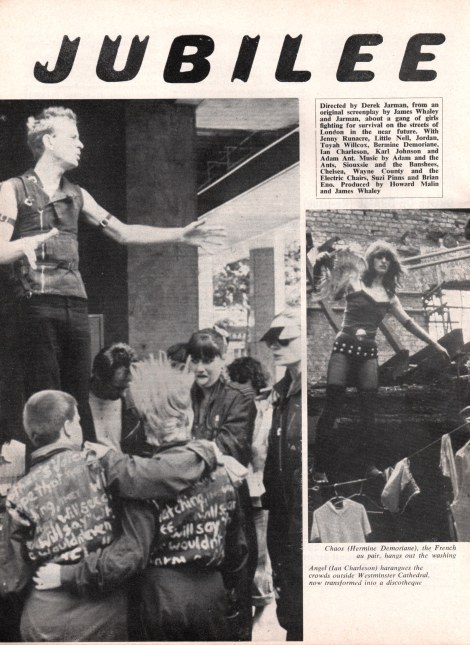 It is interesting find and EMPIRE EXCHANGE could end up being a brilliant support for Dirk – I’ll just remember to bring my wet wipes!