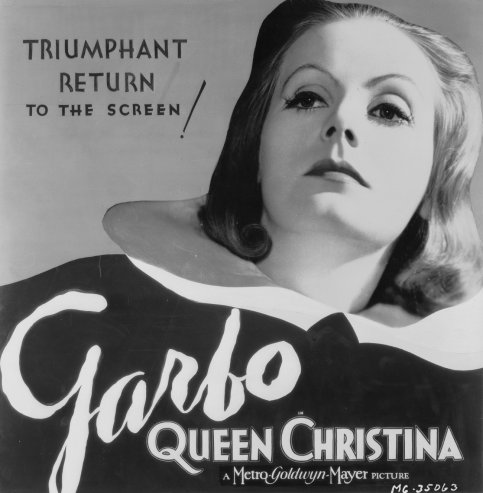 “I have been memorising this room, in the future, in my memory; I shall live a great deal in this room” Christina (Greta Garbo) after falling in love with the Spanish envoy (John Gilbert).

There were a lot of films like this in the 1930s & 40s, historical hogwash, but supreme entertainment and this may well be the best, it’s all in the handling.

Garbo had come to Hollywood from her native Sweden after finding success with director Maurice Stiller in “The Gosta Berling Saga”, she considered him her mentor and wanted him to direct her in “The Temptress”, her second film for MGM, after much disagreement with MGM, Fred Niblo did the job and he returned to Sweden and died aged 45, Garbo is said to have never recovered.

MGM built her up as one of the biggest stars of all time, even though the films they put her in were a bit hit (“Flesh & The Devil”) and miss (“The Mysterious Lady”), they held back her talking debut until 1930 because of her strong accent. They shouldn’t have worried because when “Garbo talks!” in “Anna Christie”, the world listened. She continued in films such as “Romance”, “Mata Hari”, “Susan Lennox – Her Rise & Fall” and “Grand Hotel”, but it is her roll as the Swedish Queen that she should always be remembered.

Mamoulian had just come off two masterpieces, “Dr Jekyll & Mr Hyde”(an Oscar winning turn from Frederic March) and the musical “Love Me Tonight” (starring Maurice Chevallier and Jeanette Macdonald, as Halliwell puts it “The most cinematically fluent of all comedy musicals”, both contenders for this list in their own right), both contained trick photography and pioneering use of early sound, but here he captured romance, drama and Garbo’s beauty like no other.

Christina is tired of being a Queen and having the weight of her country upon her. She is told to marry and deliver her country an heir, not for love, but for her country. Things don’t go the way they should and she falls in love with the Spanish envoy rather than the Spanish Prince and abdicates, as you might have guessed this is a Greta Garbo film, so this is more doom to come. The film ends with one of the most incredible shots in cinema, with Garbo at the head of the ship with a blank expression, an impossible shot, as the wind would be blowing one way to take the ship out of harbour and another way to get her hair in the correct position!

William Daniels was again the cinematographer for her and she insisted on final casting of her leading man, a part that eventually went to her former lover, John Gilbert, a massive silent star who had fallen from grace during sound due to his supposed squeaky voice. It was one of his last roles and he dies a couple of years later, the effects of alcohol.

After this, she continued to play doomed heroines in films such as “Anna Karenina”, “Camille”, “Conquest” and “The Painted Veil”, but then in 1939 “Garbo Laughs!” in “Ninotchka”, a wonderful comedy from Ernst Lubitsch and two years later made another (unwise) comedy for George Cukor, “Two Faced Woman”, it wasn’t that bad, but it bombed and Garbo retired, never to make another film and became a virtual recluse. The Garbo myth was born, she never married (like Christina) as she may have been a lesbian, she was almost certainly bisexual. There were rumours of a comeback, but it never happened, Billy Wilder wanted her for “Sunset Boulevard”, a part that eventually went to Gloria Swanson. There are some shots of her doing a screen test in the 1950s and she was awarded an honorary Oscar in 1954. She died in 1990 and due to wise investing, left a huge fortune to her niece.