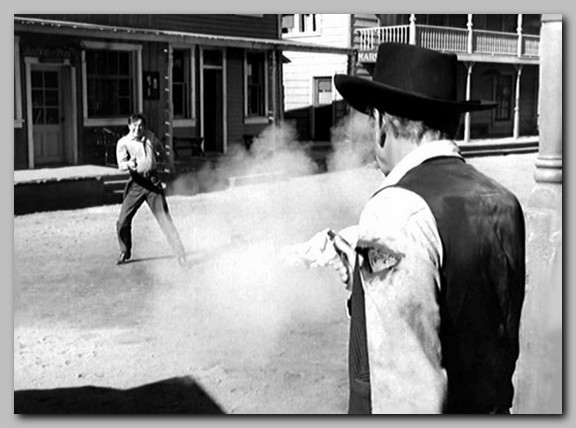 I can’t believe it has taken this long to get to a Western, but it has. There are many to have a go at and this won’t be the last, but it is only right that it should be the first.

My dad was a big Western fan and there was always some Western on in our house. I was bored out of my mind by TV series such as The High Chaparral and Bonanza, when I wanted to switch over and watch Space 1999. I remember my dad watching The Magnificent Seven and wondering when it would ever end! It put me off Westerns for a long time. My next experience of the genre was Rio Bravo during A-level Film Studies, and this too did nothing to interest me.

In 1991 after making my list of Halliwell’s Film Guide four star films, I decided that I had better watch my dad’s copy of High Noon; one of his favourite films. It was superb and made me rethink the genre, opening the door to films by John Ford, Howard Hawks, Anthony Mann, Sam Peckinpah, Sergio Leone and Clint Eastwood to name but a few.

Zinneman grew up in Vienna, where he attended University and found himself drawn to the world of film. He worked with Billy Wilder and Robert Siodmak in Germany on People on Sunday, in 1929 before moving to America to study film. One of his first assignments in Hollywood was as an extra on All Quiet on the Western Front; he was fired for talking back to the director, Lewis Mileston.

He started making short films and progressed to features, where he had his first big hit for MGM in 1944 with The Seventh Cross featuring Spencer Tracy.

After the end of World War II, Zinnemann discovered that his parents had perished in the Holocaust, which led him to make the 1948 film The Search. This was the debut film of Montgomery Clift, starring as a GI in war-torn Germany caring for a young Czech boy. It won an Oscar for the screenplay and established Zinnemann in Hollywood. His next film was the gritty and excellent film noir Act of Violence, starring Van Heflin, Robert Ryan, Mary Astor and a young Janet Leigh.

As the 50s began he made The Men, giving Marlon Brando his first part where he gave what is arguably his finest performance.

It is however for his 1952 masterpiece High Noon that he will be forever remembered. It is the story of Will Kane (Gary Cooper), a town Marshall on his wedding day to Amy (Grace Kelly), set to retire from the law and move away with his new wife, when he discovers that Frank Miller (a criminal he sent to prison) and his gang are to return on the noon train. He is caught in the dilemma of whether to stay and help the townsfolk, or to leave and let them fight their own battle. Kane decides to stay. He has just over an hour to gather up some deputies, but the town will not help him. It becomes too late for him to leave and he must face the gang alone.

High Noon is played out in real time with incredible cinematography by Floyd Crosby (father of the rock star David Crosby), who was nearly killed whilst filming the train coming into the station, as at the last minute he realised that black smoke meant the brakes had failed; fortunately he got out of the way with both himself and the camera intact.

With the McCarthy Witch Hunts taking place at the time of filming, the film was seen as synonymous with what was happening in America at the time. John Wayne called it, ‘The most anti-American film I have ever seen. A man has a duty to turn Communists in.” Enough said?

At the Academy Awards the film took home Best Actor for Cooper and was nominated for Best Picture and Best Director; it lost out to The Greatest Show on Earth and John Ford (The Quiet Man) respectively.

As time has passed it has become a milestone in the genre and it led to a much different kind of Western in the 1950s; there is little in the way of action until the last five minutes. At the end of the film Will chucks his Sherriff’s badge in the dust; perhaps he should have left the town to suffer?

Many people recorded the song Do Not Forsake Me Oh My Darling over the years, but none can touch the original version by Tex Ritter.

In the late 70s, Lee Majors (The Six Million Dollar Man) stepped into Gary Cooper’s shoes in the sequel High Noon II – The Return of Will Kane. It was made for TV and vanished without a trace. I haven’t seen it, and I don’t want to. I have High Noon.

After this Zinnemann went on to win two Oscars for Best Director; the following year for From Here to Eternity and in 1967 for A Man for All Seasons.