“She’s a good actress. She can play many different roles. She has a very good range. She can play serious roles, she can play comic roles. She’s photogenic , very beautiful on screen. She’s just a good realistic actress, as opposed to Diane Keaton who is a great comedian, who has a single personality, a very strong single personality. She’s always the same, but always great… Mia is different all the time. She’s got a wide range for different parts. And no matter how strange and daring it is, she does it well.”

Part of the motivation of seeing all of Woody Allen’s films in 2013 is to see the ones that I have not seen before. There’s a period in the 1980s that’s a Dirk blind-spot. I’m quite familiar with the seventies, thanks to repeats on cable channels, and I saw most of the 90s output as it was released, before fading away in the noughties. Apart from a couple of exceptions, I have avoided the 80s, because I have always had an unconscious aversion to Mia Farrow.

I have always found a cold earnestness to her performances that I considered un-engaging. Despite Woody’s insistence that she is a versatile actor, I cannot get past her status as a star: she is part of a Hollywood dynasty, the former wife of Frank Sinatra, the former wife of Mr Preview and she has a well known passion for adopting children. In the background was her peculiar relationship with Woody himself. They had an aristocratic agreement that meant that they were lovers but never shared a home. Eventually they became legally embroiled in a well documented custody battle over their children.

There is a certain shrillness to some of her performances that is difficult to get past, but there is no doubt that she has a commanding presence on the screen. She gives a great performance as Tina Vitale in A BROADWAY DANNY ROSE (1984), where she plays against type as a sassy mistress to the stars (and the mob). She conceals her haunted eyes behind sunglasses, so it seems like a different actress to the one that is so spooky in ROSEMARY’S BABY (1968).

All but one on this list are films that I have watched for the first time. I tried to open my mind and concentrate upon her performance in each, to try and unlock the enigma so I can understand what others see in her acting.

It’s an interesting counterpoint to MANHATTAN (1979) as it is set in the country with a European aesthetic; a lighter homage to Bergman than INTERIORS (1978). Its an ensemble piece, with each of the characters interacting with each other like they are characters in a novel rather than a film, a narrative device that he skillfully develops in some of his later films.

The part was originally going to be played by Diane Keaton. The camera loves Farrow, bathing in her in light to emphasize her magnificently structured face and enigmatic eyes. The role calls for someone who is fluffy, light and shallow, but no amount of crimping is going to hide her seriousness.

If you are looking for sex and comedy, then read the title rather than watch the film, that said, it has its moments of joy. Woody holding a conversation through a window while trying to keeping his flying machine afloat is very funny. 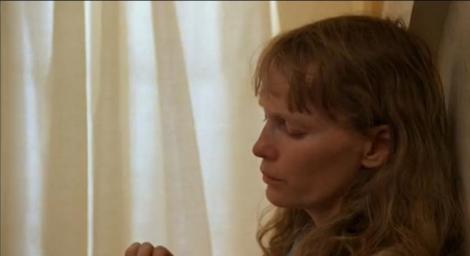 This is an unexpected treat that wears its influences on its sleeve. Chekov’s UNCLE VANYA is never very far behind as the action is set in a country house, and much like MIDSUMMERS NIGHT … there are three couplings that are miss matched and end up in a muddle over the course of the drama.

Farrow is excellent as plain Lane who is recovering from a recent suicide attempt, comforted by Dianne Wiest. Elaine Stritch is Farrow’s dominating mother who is a faded star with a salacious past. The whole drama is perfectly composed of long takes, frames within frames and intense performances that culminate in a shocking revelation.

It was poorly received on its first release, his first complete critical and commercial flop, but I think it is worth a revisit. 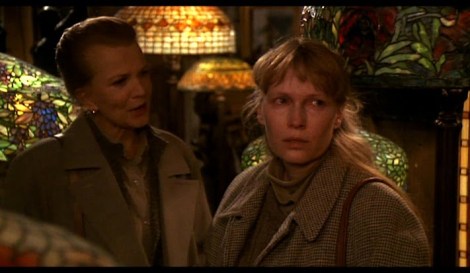 Gena Rowlands is a philosophy professor who overhears the therapy of ‘another woman’ through the ventilation system of her writers’ retreat. The harrowing experiences related by Farrow nudges Rowlands into reevaluating her own life and her attitude toward her husband.

Farrow here is at her most earnest and intense as a woman realising the futility of existence in a Godless universe.

Its an intriguing idea that fails to intrigue.

A striking red hat brings out a polished attractiveness in Farrow in this film where she plays a New York socialite who disappears into a ‘wonderland’. A Chinese acupuncturist promises to alleviate her emotional tensions by administering a series of ‘erbs.

William Hurt is her dismissive WASP husband and Joe Mantegna is her love interest that she feels increasing guilty about her feelings towards him. Thanks to magical realistic episodes involving flying and invisibility she begins to realise that the trappings of her life are poisoning her sense of self.

It was another homage (Fellini’s JULIET OF THE SPIRITS (1965)) and another relative flop, but it did attract Oscar nominations for Woody and Mia.

My favourite since ANNIE HALL. Farrow here is the most affected by the announcement of a break up between Sidney Pollack and Judy Davies. Her relationship with Woody begins to break down, leading many to see a correlation between fiction and reality.

Dom-Dirk believes that Farrow is at her most shrill and off-putting here, but I think it is used to good effect and adds to the narrative – nothing anyone says means anything, no one is speaking the truth. Her shrillness is a lie.