Call off the search, for the Holy Grail has been found, on ebay.

The first Starburst Memories feature was about my false memory of a Starburst magazine feature on EXCALIBUR. I have fond memories about how gushing the review of the film was and how exciting it seemed to my 13 year old eyes. I wasn’t even old enough to see the film, but I was keen to experience John Boorman’s epic romance with its authentic armour and bloody battles. 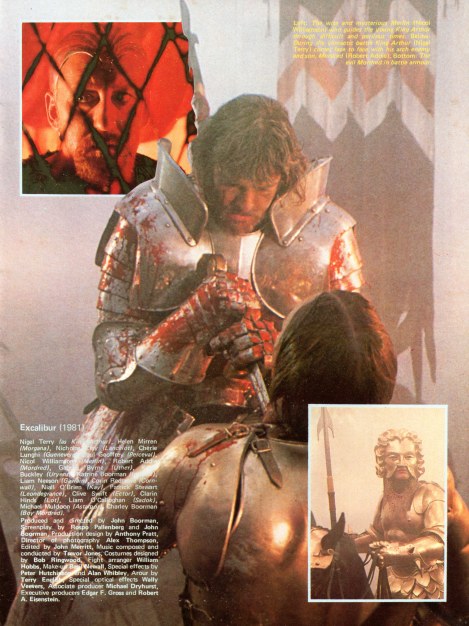 A montage of images from EXCALIBUR – you can see the joins

When I found a copy of the Starburst magazine with John Brosnan’s review a couple of years ago, I realised that he was actually quite scathing of the whole thing. He took great delight in mocking Nicol Williamson’s bizarre inflection as Merlin. Even when I went back to an issue in 1978, when the working title was MERLIN, I couldn’t find any evidence of the effusive puff that whetted my appetite to such a degree that I was willing to break the law to see it.

Why was I so keen to see the film?

Those posters were stuck to the wall using pins … yes PINS

I remembered that on my bedroom wall, among the Madness posters and the cover of Smash Hits featuring Claire Grogan, I had a film poster of EXCALIBUR. It was the first ever Starburst Poster Magazine (I’m not even sure whether there were any more) that was on my wall for a long time, so long that I’d forgotten that there were articles on the other side.

My original went to landfill during the ‘Great Move of ‘82’ but I finally managed to track down a replacement copy on eBay.

Tony Crawley, author of the original article in 1978, when the film was merely a pipe dream, wrote the text on the back of the poster with the cooperation of Orion Pictures, so it’s absurdly enthusiastic about the whole project with a heavy emphasis on this being Boorman’s personal vision. As evidence of the director’s commitment, he points out that his children were included in the production, both on screen and behind the scenes. Charlie Boorman, who has gone on to be the face of extreme travel (and Richard Herring body-double) plays the young Mordred. His daughter Katrine plays Igrayne, Arthur’s mother:

She goes on to explain how bedtime stories always featured Merlin and King Arthur and is the first to say that really Boorman is Merlin, because film-making is magic and Merlin is magic so really Boorman is a magician because he is making magical films. This motif is repeated throughout the ‘magazine.’

The positioning of the film is interesting as it set up to be a personal vision that was delivered through great hardship (the weather was bad) and with great authenticity, a “fleet of Irish blacksmiths (were trained) in the medival art of making the suits.” Yet Boorman is keen to make sure that the film is laser-guided to my 13 year old brain (even though I couldn’t actually watch it):

“Think of Obi-Wan Kinobi as Merlin and Luke Skywalker as the young Arthur, and its no shock to discover the true identity of Darth Vader!”

When he originally pitched the film to United Artists, they gave him some money to develop an adaptation of THE LORD OF THE RINGS instead. The project never really began, but it put him in contact with Rospo Pallenberg who collaborated with him on the EXCALIBUR screenplay. After making DELIVERANCE and ZARDOZ fantasy was back in fashion so Orion agreed the budget for Boorman’s ‘dream project.’

There are many little production details that I remember from reading it the first time. The scene where the crow pecks an eyeball from a corpse took three months to film (yeah, right) and Cherie Lunghi complaining about the nude scene in a nest of man-eating ants (yeah,right). These little details provide a poorly printed commentary on a small piece of my past.

I was delighted when I opened the envelope and confirmed that my memories were not false after all. It has now gone in a box under the stairs so I can use it as evidence at some future date when I’m babbling about the past in some Home for retired Contact Centre Managers … “can you hear ringing?”