Inspiration behind hundreds of terrible amateur attempts at stop-motion on youtube, Czech filmmaker Jan Švankmajer painstakingly combines a mixture of animated clay and ordinary household objects with live action to produce a weird and wonderful surrealist cinema. Beginning with THE LAST TRICK in 1964 he had made around twenty short films before he made his feature film debut with ALICE in 1988. Whilst his short films tend to investigate one particular technique from his bag of tricks, ALICE is the first work to throw all of them in together. So we get the puppets, we get the toys and creepy dolls, the anthropomorphisation of kitchen appliances so they become insects or birds, but we also get the hybrid animals assembled from the bones of different species and cuts of raw meat animated as if they are whole creatures themselves. All mixed with live action. Aside from a brief appearance by her older sister, Kristýna Kohoutová in the title role is the only actor in the film. She narrates the whole thing as the action cuts intermittently to close-ups of her mouth, setting the scene with her opening line:

Now you will see a film made for children… perhaps! But I nearly forgot: you must close your eyes otherwise you won’t see anything.

Švankmajer referred to his film not as an adaptation of Lewis Carroll’s Alice novels but as an interpretation, hence its original Czech title ‘Neco z Alenky’, or ‘Something From Alice’. It begins canonically enough, a green meadow, Alice dozes off to sleep beside a stream, but this is about as far as the more parochial, quintessentially English aspects of Carroll’s work will be allowed to permeate. We know something is up as we’re introduced to the White Rabbit: a moth-eaten piece of amateur taxadermy mounted in a glass case that jerkily blinks back to life and wrenches itself off the rusty nails holding it in position. When it clicks its teeth together it’s more unsettling than the chattering Cenobite from HELLRAISER (1987). A film made for children indeed. 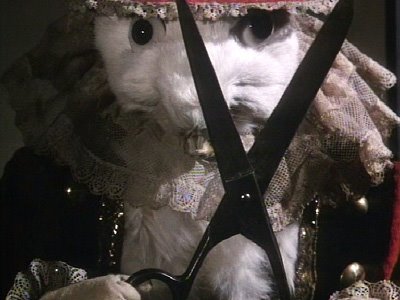 Where most other adaptations depict an ingenuous Alice set adrift in a grotesque parody of the world of adulthood, complete with its intractable logic and unreasonable authority figures, Švankmajer takes Alice on a journey through the subconscious, a world of symbols where communication takes place on another plane entirely. Švankmajer’s Wonderland is shabby and neglected. It takes the form of a massive derelict house in the style you might expect to find in the old Soviet bloc, full of trinkets and antique junk. The house has a creaking paternoster lift that pulls Alice into the depths of the building. Six months ago I visited the former Stasi headquarters in Berlin and saw the main office building has a paternoster just like it.

There is a sense that Alice is somewhere magical yet nightmarish at the same time, even though she is mostly just wandering through an interlinked set of grey rooms. A jar of jam is full of drawing pins, a plate of pastries sprout nails and pretend to be porcupines. We see a steam-punk Mad Hatter and a caterpillar made of old socks and false teeth (notably, the Cheshire cat is missing). There is so much packed into this film that it makes for a different viewing experience each time. It also showcases Švankmajer’s exquisite use of sound editing, the exaggerated slurping of soup being eaten or the satisfying ker-plunk of stones falling into water.

The Prague branch of the surrealists was outlawed for most of its existence. Švankmajer joined in 1970, as the Soviet Union invaded Czechoslovakia to halt Dubček’s liberalising reforms. Because of its underground nature, Czech surrealism retained an edge into the late twentieth century long after its Western European varieties had been blunted. Several of Švankmajer’s films were banned: from 1973 to 1980 he was prevented from making films entirely, as all projects had to be approved by central government and each one would be rejected citing some petty misdemeanour. ALICE ends in a show trial before the King, a courtroom stitch-up where the protagonist realises she is supposed to say only what she is permitted to say. She is given a book containing a preprepared confession and instructed to read it.

I first discovered ALICE at ‘The Movies’ video rental shop on Walton Street in Oxford where I would go to hide during my degree when I was supposed to be working in the lab round the corner. It had a wide range of world cinema and cult classics in glorious VHS format, and I saw a lot of my favourite films for the first time thanks to them. I recently learned it closed down 6 months ago. Still, it managed to hold out longer than both the HMV and the Virgin Megastore, so kudos to them. RIP The Movies.