For a film fanatic, Bolton was almost like a Mecca. At one time there lay within my easy reach no fewer than forty-seven cinemas of varying size, quality and character. None was more than five miles from Bolton’s town hall and twenty-eight were in the boundaries of the borough. 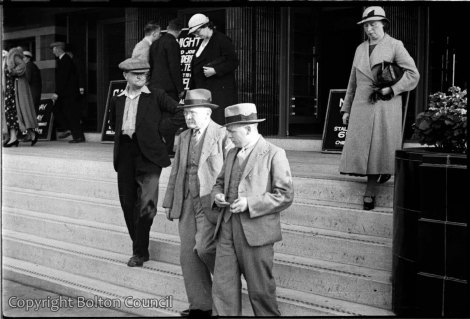 It may seem incredibly parochial to focus on the Dream Palace from my home town, but it is very relevant to the history of world cinema for two reasons: Bolton was the site of a major sociological experiment in the 1930s; and it was the home of the one of the world’s premiere film historians/ archivists, Leslie Halliwell.

The Mass Observation experiment was a extremely detailed study that documented the social mores of the working classes in ‘Work Town’. Documentary film-maker Humphrey Spender was a photographer on the project and many of the images that he collected remain standard stock images from the era. As part of the study, there was a thorough examination of cinema audiences and the films they were watching.

Opened on 21st August 1937, The Odeon was the jewel in the crown of the town’s cinemas. It was built on the location of a former collection of shops. houses and pubs in an area of the town known as Spring Gardens. It was owned 51% by the national chain, operated by the entrepreneur Oscar Deutsch (who made an appearance on the opening night) and the rest by local share-holders. The programme for the opening night was typical for the era: Gaumont British News, More Kittens (a colour cartoon), SUNKIST STARS AT THE PALM SPRINGS (1936) (a short colour musical) and the main feature DARK JOURNEY (1937) (a British made film featuring Claude Veidt and Vivien Leigh).

The local press waxed-lyrical about the splendour of the new cinema:

The interior is as equally impressive as the exterior. The walls making a sweeping ellipse to the stage, the lower part is panelled in burnt walnut, while the upper walls are fluted and painted a pale gold. The seats are upholstered in a warm red and carpets of the same colour cover the floor. All seats … are of the same design and possess the same knee room.” 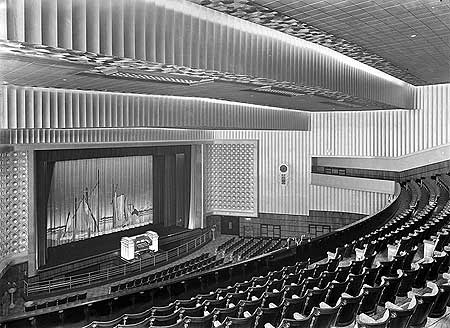 At the time of opening it was one of the largest capacity cinemas in the region with 2600 seats. They were especially proud of the rising- Compton Organ. All of the films shown there were talkies, but organ music was fashionable and having such a grand one was the ‘in thing’.

When the Odeon opened there were 21 other cinemas in Bolton and 8 of them were in the Town Centre. They began to close in 1940. The first to go was The Deansgate Picture House and others soon followed. The Odeon was sold to the J. Arthur Rank Organisation in 1947.

Throughout the 1950s and 1960s cinemas in Bolton began to close down. The organ was removed in 1960 to allow for a stage to be built. A number of big name acts appeared there including Roy Orbison, Cliff Richard and the Shads and Gene Pitney. The onward march of television meant that audiences were in terminal decline.  In 1972, the cinema was split into three screens to broaden the scope of the programme to attract families: the newly refurbished studios were opened by three sets of triplets.

The Odeon was where I first saw STAR WARS (1977) and I retain fond memories of watching the Saturday morning showing of films by the Children’s Film Foundation. The Odeon retained much of its former charm but in the name of modernisation, there were some garish replacements to 1930s Art Deco.

By 1982, Rank Organisation submitted a request to change it to a Bingo Hall, at the licensing meeting, their representative declared: “Nothing can save cinema now. There’s a million video sets in homes across the country and audiences are at their lowest ebb.”

It was demolished in 2007 to make way for a hotel development which never appeared thanks to the economic down turn (remember when it was known as the credit crunch?). In an ironic twist, a new cinema is being built to attract inward investment to the town centre. Where’s Oscar Deutsch when you need him?

We are pleased to have a visiting lecture from Prof. Dunk-Dirk who was allowed exclusive access into the building prior to its demolition. In this film he explores the projection room and provides a history of the cinema. Dunk was the founder of The Projection Room film club, which is responsible for bringing the Dirks together in the first place. This film may also make an appearance in the Film School about ‘Foley’ sound effects.

The next Film School will be PRE-SOLD CONTENT and the Main Fearure will be SUPERMAN (1978).

One response to “DIRK’S FILM SCHOOL: THE DREAM PALACES”