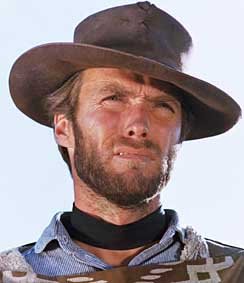 “The Man with No Name” is generally understood to refer to Clint Eastwood’s character in Sergio Leone’s “Dollars” trilogy, and Leone would use the trick for a fourth time for Bronson’s “Harmonica” character in ONCE UPON A TIME IN THE WEST (1968). The mysterious gun for hire, the person who doesn’t fit in and gave up trying: the archetype found a particular resonance with the outlaws roaming the frontier of the old American West. But the concept has found a home in many other genres, perhaps notably science fiction where sixties television introduced us to a time travelling alien whose nameless status provided not only the central mystery but also the title of the series, and a Kafkaesque village whose brainwashed inhabitants were only ever referred to by number.

Film enthusiasts have long debated whether Eastwood’s character, referred to variously as “Joe”, “Manco” and “Blondie”, actually has his real name revealed at any point, but for my money Johnny Cash solved the mystery at San Quentin in 1969. He’s definitely called Sue, isn’t he?

Here are five classic examples of the “man with no name” trope.

YOJIMBO showcases the Kurosawa-Mifune collaboration at its most iconic. Mifune plays the mysterious wandering ronin who gives his name as “Kuwabatake Sanjūrō” (mulberry bush thirtysomething), a name he makes up on the spot as he is staring at a field of mulberry bushes, and then even quips “Closer to forty actually”. In its sequel SANJURO (1962) he pulls the same trick contemplating a camellia tree (“Tsubaki Sanjūrō”). Kurosawa’s films from this period and the Sanjūrō character in particular were enormously influential in the West where they inspired Clint Eastwood’s antihero and, of course, Roy Walker’s “Say what you see” catchphrase.

David Fincher’s follow-up to SE7EN (1995) is filled with little cinematic tricks, such as the single frame flashes of Tyler Durden (Brad Pitt) that appear before the point in the narrative where the character is officially introduced. There are some who mistakenly believe that Edward Norton’s narrator is called Jack, but this is a name he gets from a pile of old magazine articles written by bodily organs in the first person that he keeps referring back to (I am Jack’s colon… I get cancer, I kill Jack). In the DVD commentary, Norton claims to know the narrator’s real name, but he isn’t telling anyone, not even Fincher. Of course, it could be Tyler Durden…

In Walter Hill’s American crime thriller, heavily influenced by Melville’s LE SAMOURAI (1967), Ryan O’Neal’s title character not only does not have a name, he barely has any lines either. In fact not a single character in the film is given a name, they’re all anonymous persons without a history, credited as the archetype they represent: the Driver, the Detective, the Player…

In Alfred Hitchcock’s first American production, as in its source novel by Daphne du Maurier, Joan Fontaine’s leading lady is only ever referred to as “the second Mrs de Winter”, leaving her firmly in the shadow of Maxim de Winter’s first wife, the film’s titular character and the apparent obsession of all who knew her.

Few things in films seem more pointless to me than taking a stab at the “man with no name” idea then suddenly relenting and giving your character a name at the eleventh hour. The Star Wars bounty hunter Boba Fett is a classic case of this: unnamed in THE EMPIRE STRIKES BACK (1980) (and, if we must, in his retconned appearance in the 1997 special edition of Episode IV), his name is used only once by Han Solo in RETURN OF THE JEDI (1983). He was even explicity based on Eastwood’s Dollars character, but I guess they needed a name to put on the action figure box. Similarly, do we really need to find out in KILL BILL: VOLUME 2 (2004) that Uma Thurman’s ‘The Bride’ has been called Beatrix all along?

But the worst offender has to be the final scene of 12 ANGRY MEN (1957). Sidney Lumet’s potboiler dumps twelve strangers in a room together, by the very nature of a jury intended to be a cross-section of fifties society in America, the immigrant, the small business owner, the middle American conservative, and pits their personalities against one another. Into the middle of this appears ‘Juror #8’, Henry Fonda in a white suit like some kind of guardian angel watching over the boy on trial. At the end of the film, in an incredibly moving performance, Lee J. Cobb’s ‘Juror #3’ breaks down and changes his vote to ‘not guilty’. As he stares down at the ripped photograph of his estranged son, the other jurors silently file out of the room. The end, fade to black. Except… what follows has to be the most pointless coda in American cinema. Having confined itself to a single room since the beginning, the film ends with this exchange outside the courtroom

WHY? It isn’t even in the play!