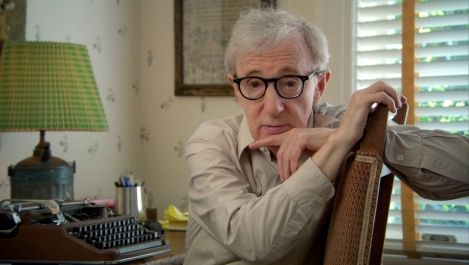 This keenly awaited documentary offers to tell you “everything you wanted to know about Woody, but were afraid to ask” is now available on blu-ray and DVD after a short release at the cinema, and original airing on the public service broadcast network in America. It really is a ‘must have’ for fans of Woody, because it is a lovingly put together film by Robert B. Weide (better known as a director of Curb Your Enthusiasm) which includes the usual collection of talking-heads and clips that are held together with insightful interviews with Woody himself excellent footage of him at work .

It focuses on his creative method, with a particular emphasis on his writing. It is clear from early in Part One of this two part documentary, that his favourite aspect of the process is the writing of the screen-play, because it is at the time of writing that the idea is at its purest form before the compromises and changes need to kick in to get it on to the screen. The film shows his desk and his Olympus typewriter that he has used since he was a teenager. It’s a remarkable artefact that has produced all his gags that were rattled off for Sid Cesar and others in the 50s and 60s, his early stand up routines and plays as well as the The New Yorker pieces, which is a reminder that Woody was much more than a film-maker before he got into films. He has been producing at least a screenplay a year for over 40 years, and even more remarkably, they are produced, making him a uniquely prolific American film maker, and as Martin Scorsese says, he still has more to communicate. He is constantly collecting ideas, observations, gags and references on napkins and legal pads which he throws on a large bed before carefully pulling them together into a narrative before hammering at the Olympus. With a bit of cut and stick, he is then ready to shoot it before moving on to the next project.

Part One moves at a deft pace taking his chronology until the early 80s when STARDUST MEMORIES (19800 marks pivotal moment in his career. The second part is more patchy, fast forwarding through some of his output in the 90s and 00s. At this point his sister Letty Aronson had a producer credit. She clearly has a very close relationship with his brother, performing a role similar to Alma Reville, as a creative consolari, close to all aspects of the production. From the early 00s distribution of his films became patchy yet he is experiencing a renaissance thanks to MIDNIGHT IN PARIS (2011) an unexpected hit that caught Allen and his sister by surprise. His films are entirely funded by Europe now, and have the flavour of a travelogue, yet they are still not guaranteed distribution in the UK. There is some clues to why the tone in some of his later films is so uneven; he is so impatient with the shooting process that he is not left with enough options in the editing suite. In this sense the documentary is unintentionally revealing as it is meant to be a hagiography.

In his review, Peter Bradshaw said that the elephant in the room is the ‘Soon-yi scandal’ that hit during the production of  HUSBANDS AND WIVES (1992). The criticism is unfair as this is an archive of his career rather than an reflection on Woody as a person. However, the affair does create the biggest absence of the documentary, as Mia Farrow politely declined to take part in the project. She was one of his major collaborators and it would have provided valuable dimension that is notably lacking as some of the best interviews are from ‘Keaton’ and Tony Roberts.

I consider myself as a Woody Allen aficionado, yet I haven’t seen some of his output, watching this documentary I have decided to set myself a challenge: to watch all of his films in 2013. I’ll be tracking my progress on here (as well as continuing with the rest of my post-Star Wars list). Why not join in the fun?