The Beatles’ Solo Years. After my initial thought of giving 4 bad films and one good one, I decided to concentrate on the only important Beatle in film, George Harrison.

In 1968 the Beatles set up their own record label, Apple, and the first album released was a soundtrack to a film “Wonderwall”, with the music by George Harrison, this is a typical swinging 60s affair (ie utter shite) and today more remembered for a very expensive vinyl LP and inspiring Oasis to write one of their most famous songs.

However George’s real involvement in film came ten years later when he bought “the most expensive cinema ticket ever” as they put it, because he wanted to see the first film on this list.

Monty Python’s Life Of Brian – perhaps the best Python film rescued by George’s newly founded “Handmade Films” and banned by several councils. It wasn’t shown on television until 1991 in Channel 4’s banned season. Today it may be difficult to see what all the fuss was about, but still one of the highlights of British Comedy.

The Long Good Friday – again rescued by Handmade from EMI, this brilliant gangster film is one of the highlights of British 80s cinema and gave Bob Hoskins his best screen performance

A Private Function – I only discovered this little gem when it was given away free with The Times, but it is Michael Palin’s finest performance as they try to get a pig for the main meal of a function to celebrate the wedding of Princess Elizabeth at the time of rationing

Withnail & I – Richard Griffiths (rest in peace) his finest hour! 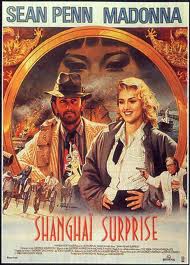 Shanghai Surprise – to be honest I didn’t think it was that bad, it looked good, it had songs by George, it had the main props made in Adlington and it starred Madonna, maybe it was that bad. I have only seen it once and have no desire to watch it again!