One of the most well-thumbed tomes in the Dirk archive is Jim Henson, The Works. A hagiography from 1993 produced by Jim Henson Productions to celebrate the creativity of their founding father. The entire family enjoy flicking through the pages and discovering little never-seen-before nuggets. I bought it from a charity shop with an overly precise charging system. They are very pedantic about their pennies. 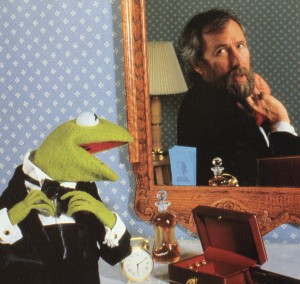 Man or a Muppet?

As you might expect, its filled with photographs and stills from the many different projects produced by Henson and his company over the years, but it also features storyboards, concept drawings and interesting side-panels packed with interesting snippets of information about the team of people behind ‘the magic’. For Henson, performance was everything and he was diligent in his recruitment of puppeteers and there are lots of lovely anecdotes about how he would seek out and woo new talent. Caroll Spinney, for example, recalls how he was part of a disastrous attempt to meld animation and puppetry in 1969. Henson was in the audience and saw enough in the concept to invite him to discuss ‘the muppets’ with him. Spinney said yes, assuming that it was some established industry jargon. Only when he brought him on board (to play Big Bird and Oscar the Grouch on Sesame Street) did he ask him what it actually meant!

Henson was born in 1936 in Leland, a small town close to the Mississippi River. He spent most of his formative years with his maternal grandmother “Dear” who was a painter and keen needleworker who encouraged young Jimmy in his creative efforts. Later, as a teenager, he showed a talent for graphic illustration and produced stylised images that were not naturalistic, but focussed on pattern and shapes. A local TV company employed him as a puppeteer using some of his very early characters: Pierre the French Rat and a couple of cowboys named Longhorn and Shorthorn. He married Jane, a fellow puppeteer, soon after graduating at Maryland University. He quickly established a reputation in the Washington DC area as a puppeteer and his characters (including an early version of Kermit) appeared on daytime television. It wasn’t long before NBC offered him his own show.

The Muppets are often referred to as ‘off-beat’, ‘zany’ and ‘map-cap’, but I’ve always been drawn to them because its humour throws-back to the music hall. Very often, the humour comes from them playing it ‘straight’. The Muppets have always been about using established, tried and tested formats but populating them with puppet characters. There is a parodic quality about them that is part of their charm. On the whole, the humour of the muppets is achieved by the effect of placing a frog, pig, bear or whatever in a familiar setting, with dialogue containing brilliantly poor punning to spice it up, or an eye-catching sight gag.

Look at the films for examples: THE MUPPET MOVIE (the muppets do a road movie); THE GREAT MUPPET CAPER (a caper movie with lavish Busby Berkeley inspired dance sequences); THE MUPPETS TAKE MANHATTAN  (the muppets put on a show and romp through show-business conventions); and, later there have been remakes of literary adaptations of A CHRISTMAS CAROL, the less successful TREASURE ISLAND. Henson cleverly embedded his characters into popular culture by “sticking a muppet in it.”

The book has some photographic parodies of movies which are of specific interest to The Dirk Malcolm Alternative. I like Miss Piggy out-kooking Diane Keaton as Annie Hall (Kermit is less convincing as Alvy). There are also a couple of Star Wars references too.

I didn’t realise, until reading this that there were regional variations of FRAGGLE ROCK. I assumed that Fulton MacKay had established a worldwide reputation as Captain. It turns out that there were multiple actors playing the lighthouse keeper across the world. In other countries the character was known as Doc and even his dog changed his name from Sprocket to Croquette in France.

Where this book really comes alive is the segments about Henson’s Creature Shop that produced dark fantasy films such as DARK CRYSTAL (1982), and wuzza wuzza LABYRINTH (1986) as well as populating other films such as RETURN OF THE JEDI (1985). Disney have scaled back their operation, they used to have a London Creature Shop, but the advent of CGI has reduced the demand for puppetry, but this book demonstrates that the 80s was the hey-day of what Lucas referred to as ‘go-motion’ where puppets would be used and the rods removed in post-production.

There’s a sombre moment at the end as it takes time to share some of the out-pourings from fans on the news of Henson’s death in 1992. The reason why this book is so well-liked in the Dirk household is the sense of admiration that I feel towards Henson’s creative impact on popular culture. He was a man of drive and imagination.