“To Tarantino” is to rip off wholesale, because you have no ideas yourself, and pretend it’s a homage.

Writing a critique of post-Star Wars cinema, its possible to under-estimate the impact of Quentin Tarantino on nineties cinema. Empire Magazine described him as the first ‘rock star’ film director, due to his prolific appearances at film festivals. In a short period of time, thanks to his stunning debut RESERVOIR DOGS (1992) and the astonishing PULP FICTION (1994) he was fully embedded in popular culture and his place in cinema history was assured.

The success of PULP FICTION bank-rolled Miramax and Harvey Weinstein declared his company ‘the house that Quentin built’. Therefore his success was the foundation of American independent cinema for the era, as well as acting as the benefactor ‘executive’ on a number of Eastern European spectaculars.

However, his influence is more than industrial, for his style of film-making created a new ‘flavour’ that enticed the palates of cinema audiences. His film heritage is steeped in an exhaustive back-catalogue of Eastern exploitation movies and a range of cult classics from the seventies but delivered with his own twist. Quotations from these films and other pop culture, either directly , or implied, are part of the finely-honed trashy dialogue that many films have tried to imitate. Other films also tried to match the audacious approach to narrative structure of PULP FICTION, with varying degrees of success. When all else fails, his imitators relish the casual violence that exists in his worlds. Its the kind of violence that can only exist in films.

I have a couple films coming up in my list that conspicuously show Tarantino’s influence, but until then here are some films that I contend that they only exist because the world of Tarantinofonia was created.

How can you homage an homage? This list proves that pop will eat itself

More than any other film of the period, this owes a certain debt to Tarantino, not least because the super-cool protagonist, Chilli Palmer, is played with brilliant aplomb by John Travolta. PULP FICTION revived his flagging career by reminding everyone how cool he once was.

This is a witty adaptation of Elmore Leonard’s novel of the same name, where Palmer is a loan shark who ends up in the movie business while collecting a debt. You haven’t seen it for ages have you? You want to watch it again, don’t you? This is the pick of the crop for me.

Riding on the coat-tails of Tarantino’s narrative trickery. The film plays with the idea of an unreliable narrator in the form of Kevin Spacey as Roger ‘Verbal’ Kint who is giving his version of a massacre aboard a ship docked in LA. He describes a host of unsavoury characters. At the heart of the story of a mysterious mob boss named Keyser Soze…. a name which is more memorable than anything else in the film.

Watching this again recently, it is not as good as I remembered it, as I was charmed by Tarantinofonia, but it could be a lot worse.

The PULP FICTION concept of interlocking characters is taken to its limit in this comedy-drama about the collision of crimes. James Spader stands out as an inept assassin. There’s an early appearance from Charlize Theron in a notable cat-fight with Terri Hatcher over something or other.

The most memorable thing about this film is the moment when they roll down a well maintained lawn. like those blokes on THE LAST OF THE SUMMER WINE, but with a hipper line in trash-talk. 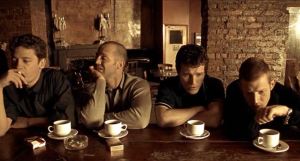 Ah, the film that launched the career of a thousand monkeys. Set in  the London that nobody knows, this is a hip, cheeky gangster film which pays homage to everything from THE ITALIAN JOB to MARY POPPINS.

Just imagine if this Krays meet The Goodfellas hadn’t been met with international acclaim – there’d be no Rocco, or English Roses and Stath would still be diving in the midst of shopping trollies and dead dogs in some murky canal instead of being Hollywood’s number one rasping super hero.

You can probably tell that I’ve fallen out with many of these films recently, but this film is remarkable as I hated it the first time I saw it. I reunited with a couple of college friends and they wanted to see TOY STORY. I insisted that this would be much better, who wants to see a kids film? Right?

I can’t even begin to do a summary … I’m bored at the very thought of it… damn you Tarantino! Damn you! I have never been in touch with those friends again. I hold Walken, with a tube up his nose responsible. We could have been laughing at ironic jokes about toy manufacturing and discussing the developments in CGI animation. Instead, it was silence ALL the way home.