” When my friends from that time see TRUE ROMANCE, they get melancholy; it brings back a certain time for us. It was weird when I first saw the movie because it was like watching a big-budget version of my home movie, or memories.” 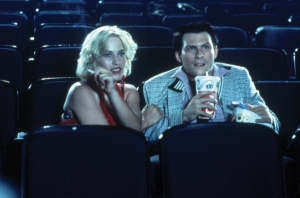 Manchester. Midnight Movie screening at The Odeon, sometime in the early 90s. Christian Slater plays charming geek Clarence who has just married a call-girl who was paid by his boss (at the comic store) for a birthday treat. Patricia Arquette is trashy Alabama who bumps into him while he is watching the Streetfighter trilogy in an all-night cinema. She’s new to the game and lives in fear of her crazy pimp Drexl Spivey. Clarence decides to take action, thanks to the guidance provided by Elvis, who appears to him as an apparition. He turns up at the brothel, ready to confront, Drexl (Gary Oldman camp-psycho turn) a white-guy in dreadlocks and a nice line in trashy talk. Pink light is diffused through hash smoke. Clarence takes aim and the bullets fly causing an explosion of blood and smashing fish tanks that flood the place. He leaves with a suitcase of cocaine.

As this scene, played out, I turned to my friend and said in a stage whisper: “This. Is. Brilliant!”

I learned the lines of the electrifying scene between Denis Hopper and Christopher Walken and recited them verbatim in the pub. Walken relishes the lines about the different tricks that people employ when they are not telling the truth.  I love the moment when Hopper realises that he’s as good as dead, so decides to protect his son and new daughter-in-law from the gangsters looking to recover their drugs. He coolly antagonises Walkden and his Sicilian roots. The inevitable reaction is chilling, as Walkden laughs along with the situation before opening fire:

I haven’t killed anybody since 1984. Goddamn his soul to burn for eternity in fucking hell for making me get my hands dirty.

At that time, I was watching 2-3 films a week at the cinema, sometimes 2-3 films a day. I hardly saw sunlight and was surviving on pringles and red wine served at Waterstones’ reading events. I’ve written before about how much of a Tarantino obsessive I was back in the early 90s. There was something very fitting about seeing this film at a Midnight showing at a multiplex as in many ways it perfectly illustrates how TRUE ROMANCE works. Tony Scott was the multiplex-auteur par-excellence. He had a real talent for taking superficial ideas, whipping them up to a meringue, strapping dynamite to it, and filming the explosion to the tune of a  hair-rock soundtrack (CD available in the foyer). Tarantino, on the other-hand, wants to revive the spirit and the aesthetics of the 70s Midnight Movie scene. The Odeon Manchester was a bit shabby around the edges, but it was no grindhouse.

Like everyone else at the time, I bought the handsomely produced faber and faber screenplay as it was in as similar chopped up narrative structure that he would use in PULP FICTION. Scott straightened it out and added a happy ending. The final scenes are relentlessly violent and caused problems for the British censor at the time of release. James Gandolfini, pre-Soprano, is relentless in his attacks on Arquette and she retaliates with the lid of a toilet cistern bringing to an end a particularly crunching scene.

It is a film that wants to wallow in the repertoire of everything that has come before. The Hans Zimmerman soundtrack quotes from BADLANDS (1973), which had a similar narrative device – lovers on the run – but TRUE ROMANCE lacks the grace and poetry of Malick’s masterpiece.

TRUE ROMANCE featured in the Dirk Screening selection for January (14) and we both agreed that something had been lost in the passage of time. Tony Scott left a legacy, for good or bad, mostly bad, on the aesthetics of mainstream cinema. Michael Bay is his heir. Tarrantino was famously declared as the saviour of Independent Cinema by Harvey Weinstein, but he is rapidly devaluing his own obituary. The passage of time has sapped the energy from the film.

Slater is still charming and the geek I still aspire to be. Brad Pitt is scene-stealingly funny as the doped-up flat mate. Michael Rapaport is very funny as Clarence’s friend, and aspiring actor in LA. Performances aside, this film is on my list for the nostalgia. I “implore” it to take me back to the Manchester Odeon and those exciting times …

I used to love to memorise those lines to recite them in the pub, but I don’t go to the pub any more.