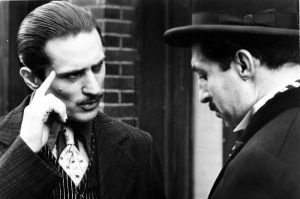 I remember back in early 1991 the big buzz coming up to the Oscars that Coppola had revisited THE GODFATHER and part III was due out before the ceremony in late March, word from America wasn’t great. I hadn’t seen THE GODFATHER, but wondered what the fuss was all about. However as a taster, the BBC decided to show Part I and Part II on two Saturdays at the end of February, could I really be bothered watching nearly 7 hours of film? I decided I better had as this was the first time they had ever been shown uncut, as part III was released the following Friday at the cinema and I didn’t want to miss it.

With part I, I was hooked from the start and loved it, I couldn’t wait for Part II the following week, but being 18 in 1991 and only one video in our house I had to watch it when nobody else wanted to watch something on the TV, so it got chopped into about three bits and it just didn’t grab me like part I. I didn’t like all the chopping before and after THE GODFATHER, why did they just not show it as a prequel and a sequel?

I remember the Empire review for Part III and things didn’t look good, it only got ** out of ***** rating, but I dragged a few people along and I enjoyed it.

As the months went by I returned to Part I & II again and again and enjoyed the darker textures in Part II as Pacino’s Don sinks deeper and deeper into Mafia life, as he kills his own brother and we see the young Vito Andolini become Don Corleone and part of the American dream.

Coming up to Christmas 1991, I decided I wanted THE GODFATHER-THE EPIC 1901 – 1959 on VHS, so I sat down and watched as Empire put it “the best seven and a half hours you’ll ever have with your clothes on”, it takes I and II and puts them in chronological order and adding nearly an hour of footage missing from both the films, there is also “The Godfather Saga” and “The Godfather Trilogy”, all have different scenes, the trilogy includes part III and all of “The Epic”, but is still missing scenes that were in “The Saga”, none of these have been made available on DVD and only “The Epic” and “The Trilogy” have made it on to VHS. It is perhaps the crowning achievement of 70s cinema. Whilst editing THE GODFATHER II, Coppola was filming another masterpiece THE CONVERSATION (1974) which contains Gene Hackman’s finest performance and is still very underrated, I think it is one of the 70s key films. After this Coppola made the Vietnam epic APOCALYPSE NOW (1979) which is again a classic in whatever version you see it (the 35mm version was different in length than the 70mm version on initial release and the Redux added nearly an hour whilst I have a 5 hour print at home that one day I may watch). After this things didn’t go well, his well intended musical ONE FROM THE HEART (1982) flopped badly at the box office as did THE COTTON CLUB (1984) , but he regained some ground with TUCKER A MAN AND HIS DREAM (1988) and PEGGY SUE GOT MARRIED (1986). So, he returned to THE GODFATHER and then ended up making rubbish like JACK (1996).

THE GODFATHER PART II cast the relatively unknown Robert De Niro, who had just appeared in Martin Scorsese’s MEAN STREETS (1973) , as the young Don Vito Corleone which won him his first Oscar for Best Supporting Actor.

John Cazale who played Fredo Corleone might have the greatest filmography ever, only appearing in five films (THE GODFATHER, THE CONVERSATION, THE GODFATHER PART II, DOG DAY AFTERNOON (1975) and THE DEER HUNTER (1979)), all nominated for Best Picture at the Oscars.

When THE GODFATHER was 25 years old in 1997 the first two films were re-released at the cinema, but I missed them and only caught up with them on the big screen over the last few years in new digital prints, they looked amazing. If you ever get chance relive these two amazing films on the big screen along with THE CONVERSATION and APOCALYPSE NOW and remember when Francis Ford Coppola truly was a great director.